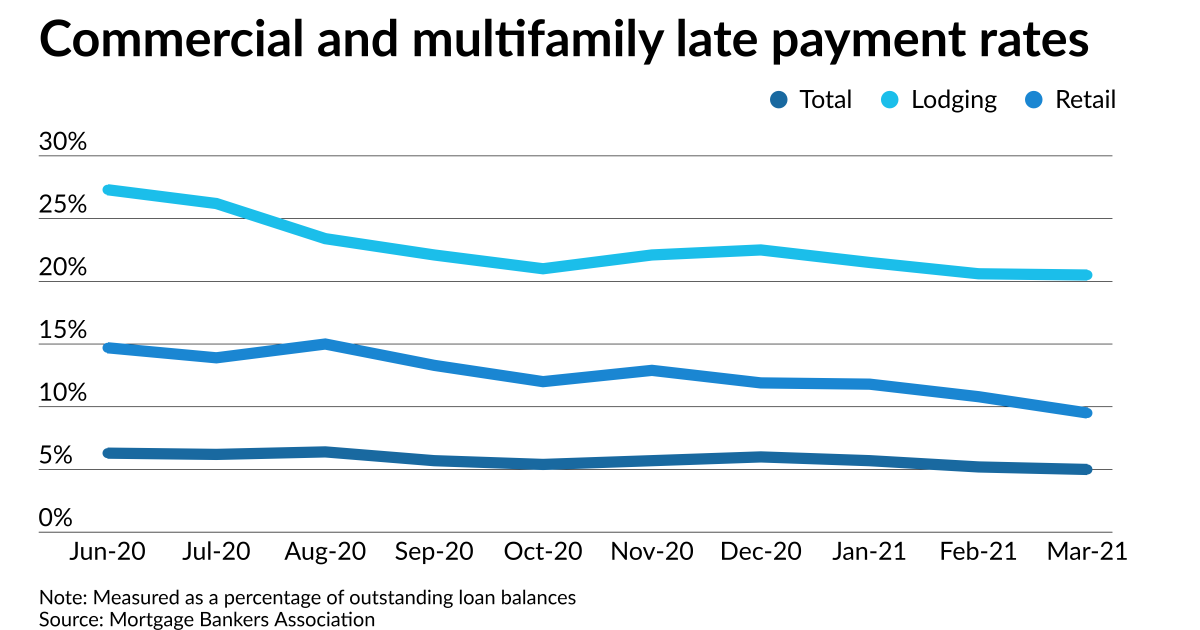 The performance of commercial and multi-family loans in March was the best in nearly a year, but there was a slight month-over-month increase in short-term missed payments, the Mortgage Bankers Association reported.

95% of commercial and multi-family loans measured by balance due were up to date on their payments in March, up from 94.8% in February, according to the MBA’s CREF loan performance survey.

“Commercial and multi-family mortgage defaults fell for the third consecutive month in March and are now at their lowest level since the pandemic disrupted the economy and commercial real estate a year ago,” said said Jamie Woodwell, vice president of commercial real estate research at the MBA. in a press release. â€œThere are still significant differences in loan performance by property type, with higher default rates for both home and personal-backed mortgages. “

The largest share of commercial mortgages in March were those without payment made within 90 days or more, or now owned by real estate, at 3.2%. This is down from 3.5% in February. Last August, the first month for which the MBA provided this data, a 2.9% share of loans that had missed at least 3 months of payments.

But the second largest group of late loans in March were those where a borrower missed a due date but was still less than 30 days late, at 0.9%, up from 0.8% in February.

Even though accommodation and retail remain the segments most affected by the pandemic, default rates on loans guaranteed by these properties improved in February.

Industrial property also saw a significant change in the share of late payments, down to 1.2% in March from 2.7% a month earlier.

Office buildings not up to date on their payments remained at 2.4% from February, while overdue multi-family loans rose to 1.8% in March from 1.7% the month before.

By type of investor, commercial mortgage-backed securities had the highest delinquency rate due to the high percentage of housing and retail loans included in transactions.

Payments were not common on 8.7% of CMBS loans in March, but that figure was down from 9.3% in February.

According to a separate report by Trepp, 6.58% of CMBS loans were 30 days or more overdue in March, an improvement of 22 basis points from February. This marks nine consecutive months of decline in delinquencies among the loans it tracks.

In March 2020, the last month of relatively normal economic activity, the CMBS default rate was 2.07%. The highest crime rate ever was 10.34% in July 2012, when balloon loans which could not be refinanced thanks to the difficult economic period.

Among other top types of investors, 2.1% of mortgages on multi-family and health care properties insured by the Federal Housing Administration were at the end of March, up from 2.7% the month before, according to the MBA report.

The late payment rate for mortgages from life insurers was 1.6% in March, compared with 2% and for Fannie Mae and Freddie Mac loans it was 1.2%, compared with 1.3% in February.

Gantry announces $ 1.16 billion in commercial mortgage loan production for the first quarter of 2021