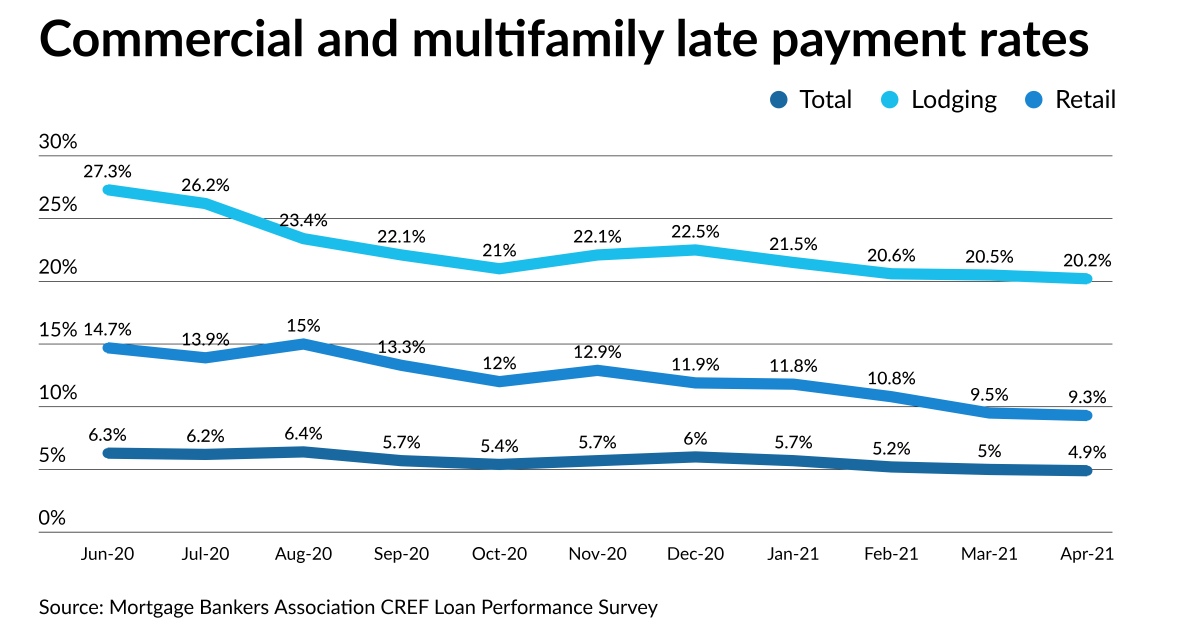 Commercial and multi-family mortgages continued to improve in April, but again the only category with an increase in their share of month-over-month late payments was short-term delinquencies, Mortgage said. Bankers Association.

Loans where the borrower was less than 30 days overdue to make the scheduled payment increased to 1.1% (on a balance basis) in April 0.9% in March, revealed the survey on the performance of CREF loans.

But the 30-60 days late category actually improved from the previous month, falling to 0.4% in April from 0.5% in March.

“New and early delinquency has declined significantly from the start of the pandemic, but late-stage delinquency rates have remained high as lenders and service officers work on options for distressed properties,” said Jamie Woodwell, MBA vice president of real estate business. real estate search. “Vaccine deployments, strong consumption records and pent-up demand are all positive signals, both for new defaults and for resolving distressed properties.”

If anything, commercial mortgages have stayed in better health than expected by the time the pandemic began, although a struggling loan sales market could still develop for certain types of properties, DebtX CEO Kingsley Greenland previously said.

There was a slight improvement in the share of mortgages where payment was made as scheduled, to 95.1% in April, from 95% in March. But the largest share of delinquent commercial mortgages remains those 90 days or more past due or now owned by real estate, at 3.2%, unchanged from March.

The two most struggling commercial property types during the pandemic – hotel and retail – showed improvement in April compared to the previous month.

By balance owed, 20.2% of mortgages secured by accommodation properties were in arrears in April, up from 20.5% from March. During the same period, retail defaults were at 9.3% for the month, down from 9.5%.

There was a slight decline in the share of multi-family home mortgages in arrears, to 1.7% in April from 1.8% in March.

By investor type, commercial mortgage-backed securities lending edged up to 8.5% from 8.7% in March. For mortgages funded by government-sponsored agencies, the delinquency rate fell in April to 1.1% from 1.2% the month before. Defaults on multi-family mortgage and health care loans insured by the Federal Housing Administration remained unchanged at 2.1%.

But loans financed by life insurance companies saw their default rates drop from 1.6% to 2%.

The MBA survey is data as of April 20, with participants reporting $ 2 trillion in loans, or about half of the total of $ 3.9 trillion in outstanding commercial and multi-family mortgage debt.